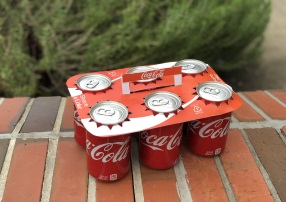 Our team was tasked with redesigning the Hi-Cone Six-Pack Aluminum can
packaging for improved curbside recyclability. One way in which the Flat Pack improves
recyclability is by switching from plastic materials to paperboard materials, to improve
the likelihood that it can be recycled by a consumer’s local recycling facilities.
Furthermore, according to the EPA, only about 8.5% of all plastics produced are
recycled and instead end up in landfills or the environment. Comparatively, about 68.2%
of paper based products are recycled, thus by switching to a paperboard material, the
likelihood that consumers will participate in curbside recycling is drastically improved.

Another way in which we improved the recyclability was by making the flat Pack
less misplacable. By improving visibility and increasing rigidity through the use of a
non-transparent material, we reduced the likelihood that the Hi-Cone is misplaced
before making its way into the recycling bin or accidentally removed from the recycling
bin by forces such as wind. Even in the event that the Flat Pack does end up removed
from the recycling stream before being recycled, it is biodegradable and poses no threat
to the environment.

The Flat Pack uses 20 point paperboard and features six circular openings lined
with curved trapezoidal “teeth” that grip the top lip of the can. The weight of the cans is
distributed evenly among the “teeth,” allowing for a sturdy packaging experience. Even
though the cans are unable to be removed via the force of gravity alone, when
consumers add a slight amount of pressure and a small twist, the cans can easily be
broken free for enjoyment.

The Flat Pack also features a pop-up handle for consumer ease in transporting
the cans a short distance. This handle is specifically designed to be part of the original
paperboard cut-out. It is composed of two separate handles that fold underneath the
package from opposite ends and come up through a small slit in the center. This adds
structural integrity as it braces the paperboard around the middle cans. The handle can
also be pushed down or folded to the side when recycled to reduce empty space. Cans
also have the ability to stack without contacting the handle.

Weighing in at 10.55 g, this package produces a very minimal amount of waste
and maximizes stability with its efficient use of material and space. Rounded edges and
a flat design made the low weight possible..

The graphics for the Flat Pack were created with a streamline flowing aesthetic.
Making use of the coca cola “Swoosh” to align with the rounded design, the graphics
should give off a sleek and efficient feel. To help promote recyclability the “Keep
happiness going Recycle” coca cola graphic was used. Lastly as part of the advertising
of the Flat Pack, the “share a coke” slogan was included. The Flat Pack has rotational
symmetry of 180 degrees to ensure that no matter what angle someone might see it
from, they can read the graphics. 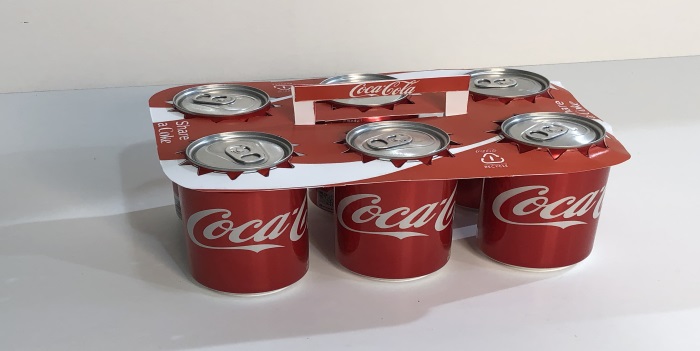 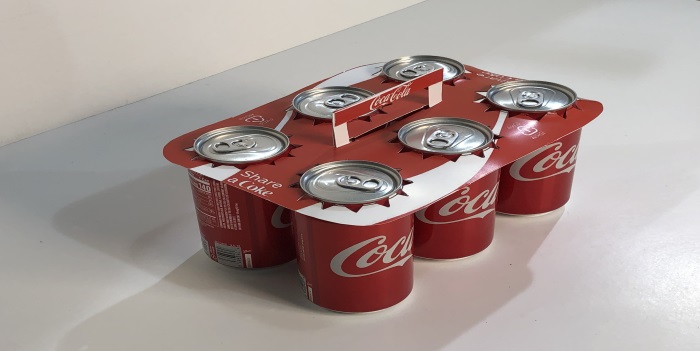 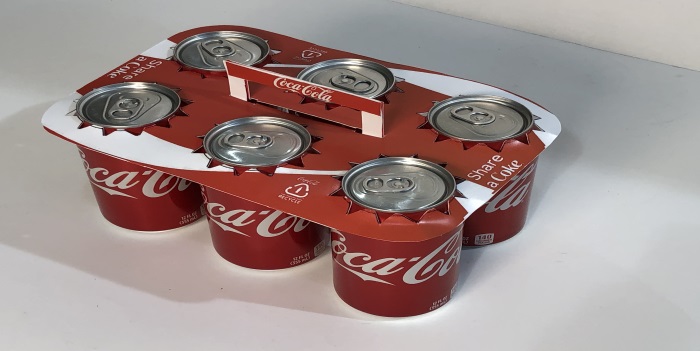