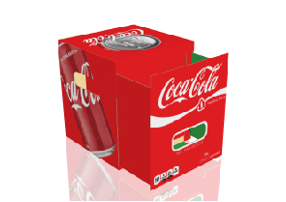 One of the biggest challenges facing the beverage industry today is the low recycling collection rates. Because the recycling rates are low, the easily recyclable materials like aluminum and paperboard end up in landfills where they must sit and wait to biodegrade instead of going back into the recycling streams. Coca-Cola is fully committed to alleviating this problem and so they want to create a package for the consumers that promotes recycling.

To assist Coca-Cola we have created Re-Coke, a 24 pack of 12 oz cans that also functions as a recycling bin. Our design features a drawer and a divider that allows the packaging to also function as a recycling bin. The box works by initially taking a can out of the perforation on the back of the box. Once finished with the can, the drawer on the front can be pulled out to place the empty can inside. The partition in the box separates the old and the new cans while saving space as the drawer can be pushed back in to consolidate the cans together. Once the consumer is finished with all of the sodas all they must do is slide the last stack of cans in and take it to a recycling facility in one convenient package. Since the packaging doubles as a carrier for the cans, the consumer will be more likely to recycle since there is less effort in collecting and sorting.

For our graphics we chose to keep the classic Coca-Cola graphics to keep the packaging as recognizable as possible. On the outside of the box we chose the colors red and white to make the packaging instantly recognized as a Coca-Cola box. On the inside of the basket we chose a green palette to radiate the idea of recycling. One of the most prominent graphic design elements made was the combination of a recycling logo and the Coke swoosh. This was made to promote how Coca-Cola is committed to achieving its recycling goals and how recycling is an important part of the company.

Our package hopes to aid Coca-Cola in reaching its recycling goals by making recycling easier for consumers by making the packaging and recycling occur in the same box.