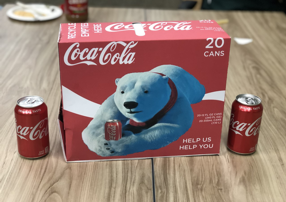 No matter the time of year, everyone wants to enjoy a refreshing can of Coca-Cola. There’s nothing more relaxing than cracking open an ice-cold Coca-Cola on the beach during a warm summer day.  However, with typical use, consumers discard of both the product’s primary and secondary packaging after use. On both a national and global level, despite Coca-Cola’s packaging being fully recyclable, they’re still not making it into recycling streams more often than not, ending up in landfills or polluting the ocean. So as a convinent packaging solution, we developed a package that incentivizes recycling among consumers innovating a design to enhance the brand’s new Reduce Reuse & Recycle idea with a new 20 can Coca-Cola fridge pack.  Our redesigned fridge pack introduces an easy access opening that allows consumers to take a single can, and later reintroduce their empty can into the package via a perforated hole on the top of the package. We implemented a paper flap to separate the full cans from the empty ones, while also pushing the full cans towards the opening. After use, the consumer can then close the can access opening, and easily carry the package to a recycling station allowing for both the used aluminum cans and paperboard to be properly recycled. Therefore, keeping it out of landfills and our oceans. Insuring more of Coca-Cola’s packaging will end up in the recycling stream. We believe this along with our emotional appeal through our graphics will increase customer desire to recycle and assist Coca-Cola in achieving their recycling goals in a way that’s convenient from a consumer standpoint.

Additionally, with our package’s graphics containing an endangered animal we establish an emotional appeal with the consumer. The polar bears featured on our package will be used as an emotional incentive by connecting the consumer to the benefit of recycling the product they are helping wildlife throughout of all Earth’s continents. With the current low recycling rates and a majority of recyclable packaging ending up polluting oceans, this poses a great threat to wildlife. So, by using that emotional connection we can create awareness for the situation and compel consumers to act and with the assistance of our convenient recycling option, they can recycle our product’s packaging. Help us help you!