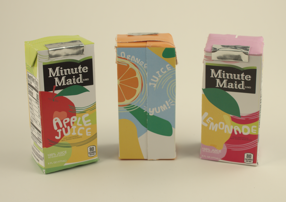 Having been tasked with crafting a straw-less juice box, we wanted to
maintain the simplicity of the design while improving on the products usability and
sustainability. One of the ways we were able to accomplish heightened
user-friendliness was with the instatement of a peelable tab that can be easily
removed to reveal a drinking hole to access the juice. Not only does this process
require fewer steps and produce less pieces of waste than the current straw
situation, but it can also be easier for people who may have disabilities like
Tourette’s and Parkinson’s to remove the tab while not having to worry about
whether or not they’re able to get the straw to its proper place. The opening is also
large enough to where if a straw – metal, silicon, paper, or otherwise – is wanted or
needed, it’s able to fit.

Along with better usability, the box is designed to maintain a sanitary
method of consumption. The peelable tab covers the majority of the area that a
person would place their mouth upon. This prevents contamination that would
result from drinking beverages from an uncovered, strawless opening. It also
eliminates the issue of having to readjust the straw with your hands if it somehow
slips too far in or out of its optimal position.

In order to improve the recyclability and sustainability of the product, we
envision using Tetra Rex® a product of Tetra Pak. Tetra Rex® is a fully renewable
form of Tetra Pak®, made entirely out of a combination of plastics derived from
sugarcane and paperboard. Tetra Rex® is the world’s first carton made entirely
from plant-based, renewable packaging materials and in 2015 it won the
Sustainable Innovation title at the Sixth Annual Responsible Business Award.
Although the current Tetra Pak® is fully recyclable it is consistently not recycled
and cannot be made from recycled materials. The Tetra Rex® will allow us to push
the recyclability factor in order to promote an increased recycling rate and reduce
non-biodegradable landfill waste.

We also redesigned the graphics for Minute Maid® juice boxes with brighter
colors, more abstract art, and very prominent illustrations of the fruits the juices
come from for easy identification. This should help to make the packaging more
enjoyable for younger demographics such as school children, as they are one of our
primary intended audiences. However, since it will most often be a parent or
guardian that is going to buy the product, we also wanted the design to be dynamic,
eye catching, and clear as to what they would be purchasing.
Overall, we aimed to streamline the existing design by improving simplicity
and inclusivity in customers’ physical interactions with it as well as upping its
appeal on the store shelves in their visual interactions. We believe that we achieved
what we set out to accomplish and that the improvements made would have a
positive impact on Minute Maid juice box products.