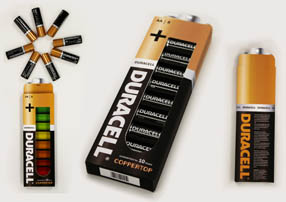 In my opinion, among the three options in the competition, battery packages are the least creative ones and also, they suffer from the poorest functionality. In what follows, I will describe the whole process of designing and preparing my battery package.
First, I created the form of the package. Imagine a consumer with no prior information who is wandering in a supermarket and looking for a battery. The most attractive feature of two identical battery products that can convince the customer to purchase one rather than the other is its package design. That is why in my design, I tried to develop an intriguing package that resembles the company’s product. It is a simple design that looks like a battery, with the same colors and style as the Duracell’s batteries. The package will attract the costumer curiosity and hence make it more likely for him/her to purchase it.
In the background of the container, I have used different colors that are symbolically familiar to the people’s eyes to remind them that they are running out of battery jokingly!
Second, quite surprisingly, it seems like that the functionality of the battery packages do not receive much of attention since they almost all suffer from the same type of problems. They are not easy to open, and after being opened, they are not closable. That is, you have to destroy the package to get to the batteries. Storing the demolished package is also another problem that should be dealt with. To address all these problems, I have created an easy to use package in which pulling out the batteries is straightforward and convenient. The package will not be damaged in the opening process, (as it can be seen in the video) and also, it is easy to close the package after usage. Storage is also simple. The package can be simply hanged on a wall, or it can be put on a shelf or inside a cabinet.
The last point I want to make is that, to build the package I have only used paper since paper is both renewable and recyclable. Hence, even its wastage is not environmentally dangerous for our planet. Meanwhile, the package yields great stability and firmness as a battery container.