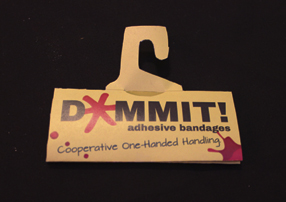 Why is it so difficult to open an adhesive bandage package? Why is it so difficult to then place the bandage on your injury? It’s because you haven’t heard of D*mmit! D*mmit!’s new simplified bandage packaging allows for both cooperative access and one-handed handling. The small design will allow for easy storage and accessibility in your bathroom cupboard. Despite its small nature D*mmit!’s bright, eye catching name and design definitely stand out in the store.

Because of the nature of D*mmit!’s packaging the adhesive bandage will remain sterile while applying it to your injury in only three simple moves. Just open the paper wrapping and grab the loose end of the bandage with the sterile paper covering. Next remove the bandage entirely from the paper wrapping. And finally apply to your wound while removing the sterile paper covering. When you are finished applying D*mmit!’s sterile adhesive bandage to your wound and have cleaned your hands, simply close the package and hang or place the bandages back in your bathroom cupboard.

Once you have removed a bandage a smart message is revealed to help you with your healing process. D*mmit!’s packaging holds bandages on both sides allowing for many bandages to be sold on one package. Thus making sure you do not run out of bandages when you need them most. The nature of the package will also help you notice when you are running low on bandages, so you will always know when you get more.

After years of struggling and frustration with common adhesive packages comes a cooperative one-handed package design. D*mmit!’s packaging allows for easy opening, accessibility, usage and storing. D*mmit! will give both kids and moms alike simple and sterile access to an adhesive bandage. 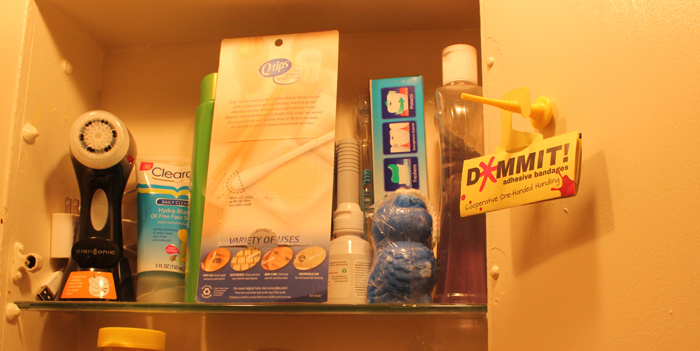