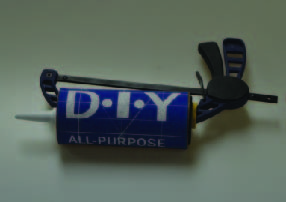 Todays world filled with amazingly talented women, youth, men, hobbyists, apartment dwellers and the like posting their DIY project to Pentrist, Instrctables, Maker Fairs and YouTube and more. This massive, and growing group of DIYers is reliant on adhesive solutions designed for children with glitter or construction teams putting up McMansions .

Caulk-it-Yourself (CIY) addresses key drawbacks in current adhesive products.  Firstly, the size of a calk tube is too large for many home products and as a result can’t reach into tight places and leaves too much product in the tube when the job is done. Any product left in the tube goes to waste. CIY solves this issue by providing a tube one-third the size of a standard calk gun.

Secondly, calk tubes are difficult to open and nearly impossible to reseal. Traditionally, a construction worker will cut the tip open with a box cuter and when he is done he will shove a nail down the neck of the tube to reseal it. CIY is pre cut, when the user removes the screw cap the product is ready to use and the bead size is consistent every time. When the job is complete the cap can be screwed back on to prevent leaks and drying. This cuts the mess and reduces the amount of waste product due to poor closure with nails.

Third, calk guns can take a seriously strong grip to operate. It’s not uncommon for some customers to use both hands on the grip and only get a dribble of adhesive. A two-handed approach limits accuracy while a single hand is shaky at best. Either tactic makes for an embracing DIY YouTube video. CIY solves this issue by using a smaller calk gun with better leverage which allows the user to accurately dispense the calk with only one hand and not look like a newbie.

Where CIY really separates itself from the standard calk gun is that its plunger does not require a full throw and cuts through the tube with each pull. The cutting action happens behind the plunger head so there is no risk of spills, leaks or dried product.  The primary advantage of this arrangement is that the CIY  can reach into small spaces where the normal caulk gun can’t reach.

Finally, the standard calk gun is a one trick pony, which is not so flattering in a world of multi tasking, tiny homes and continuous improvement. The CIY plunger mechanism is actually a small speed clap that is doubling as a calk gun. When gluing is complete the user can quickly remove the clamp and use it to hold the project in place without fear of the tube leaking.

Caulk-It-Yourself is not an innovative, world changing, revolution in adhesive technology. It is a simple and effect melding of current ideas and products that lets the DIYer focus on making their project amazing. 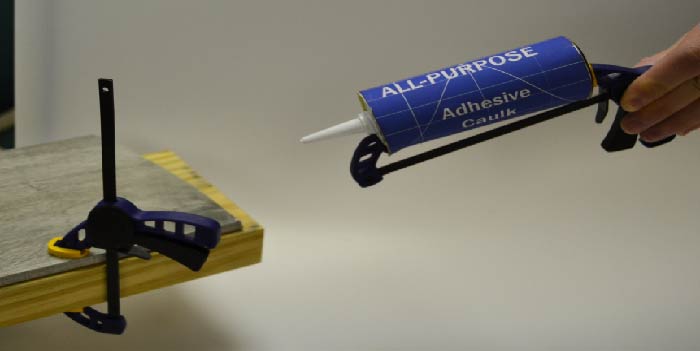