The packaging of butter has remained largely unchanged (apart from butter tubs) for the past 106 years. Butter is cut into sticks or blocks and wrapped up in foil or paper and packed into a box. Its staying power is a testament to the simplicity and efficiency of the design, but there is nevertheless considerable room for improvement.

Most manufacturers in the US use a standardized package, leaving store shelves rather homogeneous with different brands of butter struggling to stand out. From a consumer perspective, people today don’t use quite as much butter as 100 years ago, so buying a 4-pack of butter would be inconvenient. Finally, functionally speaking, butter wrappers are flimsy and prone to breaking down, are poorly sealed and thus allow the butter to go rancid or pick up off flavors in the fridge, tend to be messy and smear butter on one’s fingers, and are difficult to measure from despite marking off tablespoons.

Inspired by the basalt columns of the Giant’s Causeway in Ireland, we opted to design a new hexagonal form factor for the Kerrygold brand to solve these problems. It firstly offers improved ergonomics, with blunter angles fitting the hand better while allowing the butter to be handled naturally. (Indeed, new interactions were discovered in our testing, such as using the butter like a glue stick.) Secondly, it stands out in an ocean of rectangles, without much compromise on space efficiency.

We designed two sizes, both 4 oz and 16 oz, allowing the consumer to pick the quantity that suits them best. Since the butter is not broken into separately wrapped sticks, the larger size uses less material than a typical 4-pack of butter.

Our package is made from recycled, unbleached cardboard. The cardboard used was selected in particular to preserve raw material and keep waste paper out of landfills, unlike the foil-coated paper typically used or the virgin pine used for Tetra Pak. Soy ink was selected, naturally, for improved biodegradability and lower environmental impact.

The rigidity granted by wrapping the butter in cardboard allows the consumer to freely handle the stick. The resulting improvement to durability also makes individually sold 4 oz sticks viable for the first time, and might cut down on food waste due to damage.

Rather than simply marking off tablespoons graphically, the package itself is regularly perforated (per tablespoon for the 4 oz unit and every 4 tablespoons for the 16 oz unit) with a glued pull-tab to peel away the packaging. This gives a flat edge to cut against for precise measurements with minimal effort. The hexagonal shape additionally makes it simple to divide up smaller-than-marked portions.

Finally, rather than struggling with folding a wrapper, the cardboard cap provides a way to maintain freshness with no mess or effort. The cap itself has two rip-away tabs, allowing the consumer to easily pull out the butter as it’s used up, from the first tablespoon to the last. 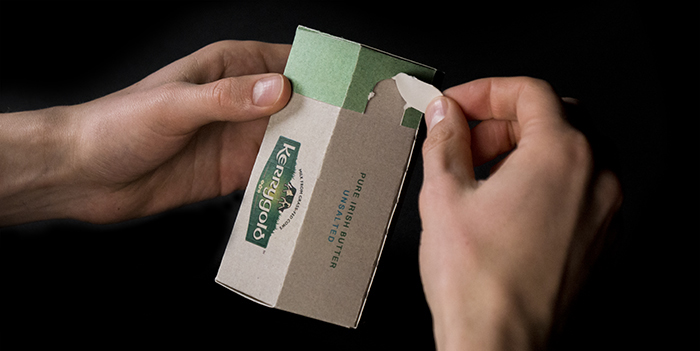 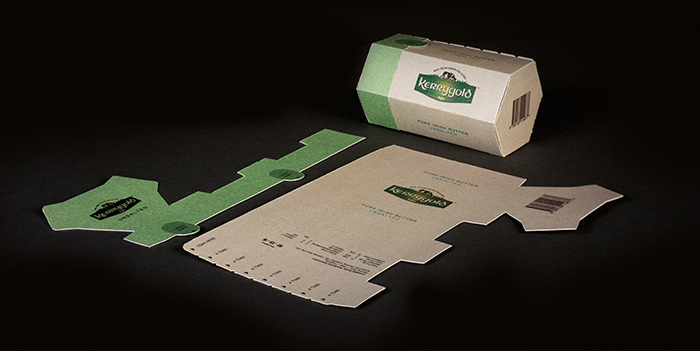 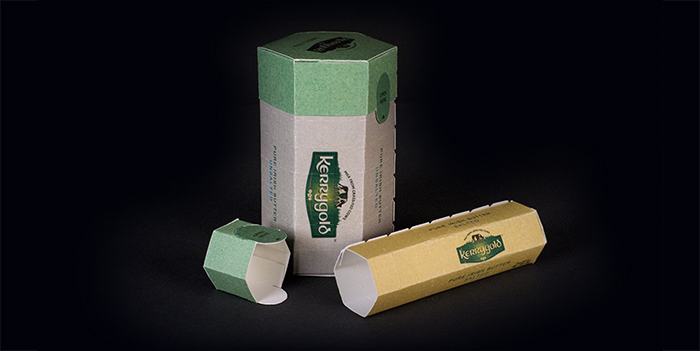 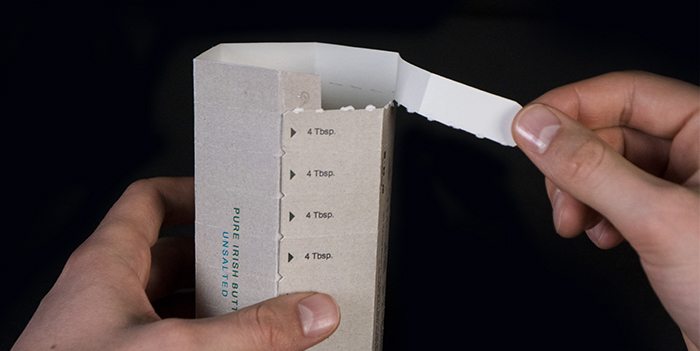